I was excited to go to Lov even before it opened. I always passed by King St W and saw the sign saying it would be the most instagramable cafe ever, so how could I resist it?

Actually Lov is new in Toronto but there are other locations. It serves vegan food in a pretty environment and we had to try their weekend brunch!

We could make reservations on the same day but I have to warn you 1) my hubby and I are early people and we usually come before any restaurant starts to get busy and 2) that day was really really really cold, so only brave people were on the streets. As more people started to come later I’d suggest you make your reservation a couple days in advance.

I ordered a Parsnip and Pear toast ($10) and a beyond meat sausage ($3) aside. I would say it was a good decision to order the sausage because I found the toast plate pretty small and it wouldn’t be enough for me otherwise. But despite the size, it was delicious. The flavours were well balanced together. What surprised us was that there was no interesting seasoning. You know, when you eat something that seams ordinary but the local seasoning makes all the difference? Well, we didn’t find it there.

My husband ordered the Apple pancake ($16) and felt the same: a regular pancake that you could eat anywhere else. The good news is they are vegan and gluten free so tasting the same as a “normal” one is a good thing in this case.

We have to confess we both considered ordering the Tofu Benedict ($18) and when we saw the girl at the other table eating it we kind of regretted. It looked delicious, so we have to come back to try this dish.

As I mentioned it was early in the morning so we passed the cocktails and had black coffee, which was pretty good.

Overall it was a nice experience, this place is gorgeous and it’s perfect for taking a lot of photos. I’d recommend it for brunch with girl friends when everything you want is to have a pretty ambience for the best fun conversations.

Despite the lack of “distinct flavour”, the food was good and the fact that everything is vegan and yet appealing to carnivores like us is a huge plus.

Hi, I'm Luciana but you can call me Lu. I'm a lifestyle blogger and Boutique owner who loves to share (reachable) tips on how to live a colourful and happy life. English is not my first language, please forgive me if I make some mistakes. 📍Toronto, Canada. 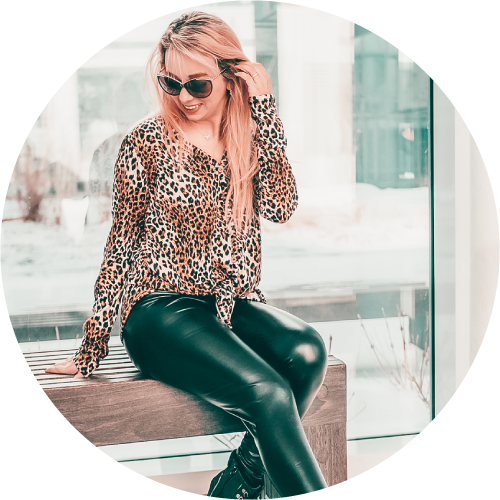 Hi, I'm Luciana but you can call me Lu. I'm a lifestyle blogger and Boutique owner who loves to share (reachable) tips on how to live a colourful and happy life.
English is not my first language, please forgive me if I make some mistakes.
📍Toronto, Canada.